Performance by the English Drama Group on January 30th 2015

Shake it like Shakespeare: grades 8 to 12 at their best

They were excited and very happy about the success of their Shakespeare performance. They, that is the pupils from grade 8 to 12, who have been working with Shakespeare for almost half a year by interpreting sonnets and various dramatic texts most of them rewritten into modern English such as Sonnets 18, 22 and 116, Macbeth, Hamlet, Richard III, Romeo and Juliet, A Midsummer Night´s Dream and As you like it.

The Bard himself may be dead, but not at all what he has to say. So it is evident in The Sonnets that true love and eternal youth acted out convincingly by Yasmin, Martha and Marla are of great importance today more than ever. And are there not people around us, like Richard III, who elbow their way up, pave their own road to success (Julian/Louisa) regardless of how much others suffer? And what about Macbeth (Luca/Rahel) driven by the will to achieve even more but prevented by his guilty conscience? Or love that mustn´t be because others decide who to love in Romeo and Juliet (Marisa/Marla). Hamlet (Felix) cannot make up his mind whether or not to commit suicide as he doesn´t know what will expect him in the world beyond. And don´t you forget the cheeky Puck (Felix) and the lovely Fairy (Yasmin) in A Midsummer Night´s Dream.

Finally Shakespeare tells us that the whole world is nothing but a stage on which man may play his role for a limited period of time (As you like it, Maximilian) and is far less important than he thinks.

After all the doubts expressed in the plays, there is at least no doubt about one thing: This performance was charming, impressive and touching.

Congratulations and many thanks to the actors. 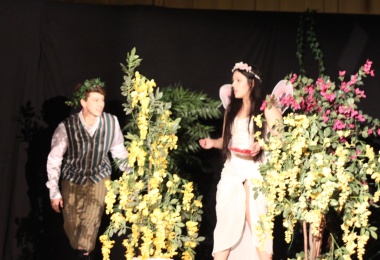