"The strange case of Dr Jekyll and Mr Hyde"

Friday, 21st October 2016, wasn't a normal school day for the English classes of the 11th and 12th grades. Everybody was looking forward to a performance that was going to take place in our "Aula": a play called "The strange case of Dr Jekyll and Mr Hyde", acted out by David Davies.

The play is about a man, Dr Jekyll, who was a doctor living in London. He had lived a life dedicated to medicine and helping others to improve their lives. All his life he had had dark desires and was convinced that there could be two personalities living in one body. Then he found a formula to transform himself from Dr Jekyll, his good side, into Mr Hyde, his evil side. He rented a flat in Soho for Mr Hyde and began to roam the streets of London, where he trampled violently over a little girl in the street and was stopped by the furious Dr Lanyon and the child’s parents. When they angrily demanded an explanation, Hyde took the parents and Dr Lanyon to Dr Jekyll's house. He entered the building and gave them a cheque for the medical care for the girl, signed by Dr Jekyll. Jekyll realised that he had to stop taking his formula and transforming into Mr Hyde, but he couldn’t resist and took the formula one more time. Then he rushed to the inner city of London and killed the famous Member of Parliament, Sir Danvers Carew, who accidentally got in his way. A woman who was watching this incident from her window was also attacked by Hyde, but at the last moment Hyde decided not to kill her. In the end, the evil side of Dr Jekyll won and he remained Mr Hyde.

All in all, we had a great time watching this different kind of theatre. By using an old type of language, Mr Davies gave us an insight into what 'Victorian' sounded like. This might have been a bit of a challenge to some of us due to the accent which the actor spoke but in the end, we all got the meaning of the play and even learned some new vocabulary. The mysterious and funny story made us laugh once or twice and we enjoyed it very much. Finally, we were very pleased to gain this experience Mrs Jenkinson had made possible. Therefore we hope that the chance to watch a play like this will also be given to Q11 students in the future. 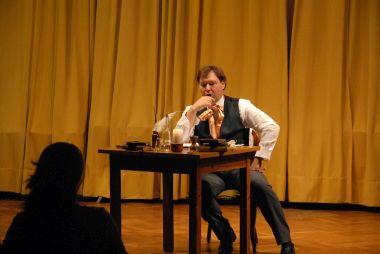 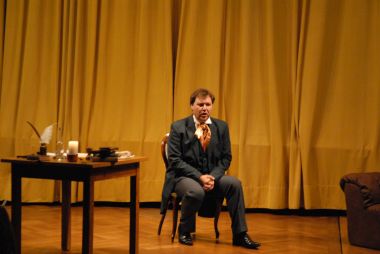