On 26th October the English courses of Q11 went to see a stage performance of The Wave based on Morton Rhue´s famous novel, which again goes back to a true story that happened in the US in the late 1960s. Impressively performed by the actors and actresses of the American Drama Group Munich, the play shows how fast words like discipline and order can be used to manipulate naïve students in a classroom who are finally led astray by their teacher´s propaganda. The novel and the play are perfect examples of how demagogues, up to the present day, work to win people over.

Many thanks to the American Drama Group and the "Elternbeirat" at Casi for the financial support. 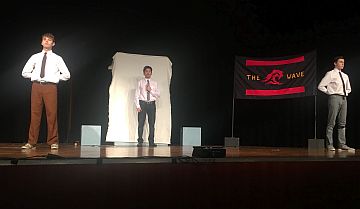