On Saturday, 18th October 2014, we finally went on our trip to London. As we had a double-decker bus everybody wanted to sit on the upper deck, which turned out to be the wrong choice if you wanted to breathe normally and sleep for a couple of hours. After a few stops in between and some great excitement, as one of us said he had lost all of his documents at a service area - which turned out to be the back of his seat-, we finally arrived at Calais harbour. There we had to wait for a while and the sunrise was almost over when we left the harbour. The passage was great and we were almost disappointed when we arrived in Dover. After a one-and-a-half-hour ride our bus took us to Greenwich where we visited the Royal Observatory. With all the knowledge about meridians and the importance of Britain as a seafaring nation in mind we strolled down the hill to the Thames to wait for a boat which took us to the Tower of London. We passed by the former Docklands of London and had a breathtaking view of the different new buildings. During our free time at the tower some of us already started to buy souvenirs before we went on to St. Paul´s Cathedral. Believe it or not but on our way there we had the impression that there were more Starbucks in London than Londoners themselves. 31 Starbucks we had counted when we arrived at St. Paul´s which meant the end of our first fascinating day in London. The Monday started with a sightseeing tour by bus, which, thanks to our guide, provided us with loads of information not just for the everyday tourist but also gave us information only an insider can get. When it was over our cameras and smart phones were about to burst with the number of pictures we had taken. Right after that we went for a walk through Covent Garden, where most of us used our free time for shopping and eating so we were all relaxed for our next long walk down to Southbank and we were surprised to see Millennium Bridge in quite a good shape. Wasn´t it destroyed in Harry Potter? On the other side of the Thames we visited Tate Modern, an art gallery. Because of the heavy traffic we couldn't do our night trip through London, but what we saw just on the way to Morden, where our families were waiting for us, was more than impressive, too. On Tuesday we all went to the Globe Theatre and the best of all was the guide there. He was not just funny and gave us a lot to laugh about but also informed us in his own way about Shakespeare´s time, the Elizabethan Age, what life was like back then and the history of the rebuilding of the Globe. Right afterwards we hopped on the bus to go to Windsor Castle hoping to see the Queen, who was obviously quite busy and not able to see us on that day. The buildings there were very impressive, especially Queen Mary's Doll house. In the evening we went to the musical Billy Elliot. It was almost unbelievable how perfectly the little boy playing Billy could sing and dance. Wednesday first took us to Mme Tussaud's, so we all have photos of ourselves with Angela Merkel or Albert Einstein now. Then we went for a walk through Regent's Park, which was very nice, too. It's the park just in front of Buckingham Palace, where there is the Changing of the Guard. Our next destination was Camden Lock Market. The difference between Camden Lock and Oxford Street was big, but both were great. Thursday was our last day in London, which started with the big wheel The London Eye. We all took a lot of photos from up there because we were lucky and had a great view of London. After that we had free time and some of us went to the Hard Rock Café others bought their last souvenirs. The last thing we did in London was to take a picture of the whole group on Westminster Bridge.

All in all, a great stay in a great city with (almost) great weather all the time. To be repeated any time! 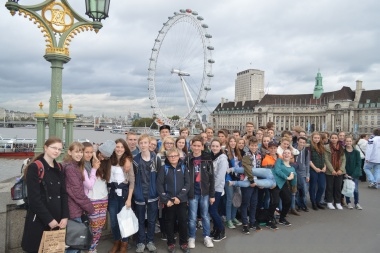