On 22nd October 2016 at 7.30 pm we, 44 ninth graders and four teachers, met at Sagasser in Coburg to start our trip to London by bus. The whole bus tour lasted for about 16 hours and one can imagine that we didn´t really sleep a lot. At about 8am we took the ferry from Calais to Dover and we were more than glad when we finally arrived in Greenwich at about 11am.

Our first destination was the Royal Observatory in Greenwich along with the prime meridian and from up there we enjoyed the fantastic view over London. After about two hours we went through Greenwich Park down to the Thames from where we started a boat trip along the Docklands to the Tower of London.

During the short trip, we saw buildings like the Shard, the London Eye and a lot of other sights like the Tower Bridge, which was very fascinating. At the Tower, we had some free time and most of us wanted to buy something in the first Starbucks we saw in London. At that time, we did not know how many of these coffee shops we would see in the days to come. Later in the evening we were all very excited because we took the Tube down to Morden and got to know our host parents.

On Monday morning we all met at Morden car park and told each other about our new "homes" and, as expected, not everybody was completely happy about their families. But we forgot all this when we started our very interesting sightseeing tour, which was guided by a nice German woman who told us everything about the most popular sights in the middle of London and we took a lot of pictures during the tour. After that we walked (and we walked a lot) to the Globe Theatre for a guided tour where we learned about the history of the theatre and its beautiful stage. Before we went across the Millennium Bridge, we had the chance to go into the Tate Modern, a museum of modern art, where we especially enjoyed the fascinating view from the highest point of the building. Later in the afternoon we visited the famous church St. Paul's Cathedral and in the evening, we went home to our host parents to eat something and sleep like logs.

We started the next day with a long bus ride to Windsor Castle. Equipped with audio guides in the language of our choice we visited all the buildings of Windsor Castle, got to know something about its history and saw the beautiful rooms inside the castle. After that we went back to London with our more than patient bus driver who took us to almost any place we wanted. In Oxford Street we just had one and a half hours for shopping and we all agreed that this was not enough. At the end of the day we walked through Hyde Park where we saw the sporty side of London with its many joggers.

On Wednesday morning, we visited Madame Tussauds where everyone took a lot of photos with the famous persons who are made of wax. Then we went to Camden Lock Market, which is a place with a lot of little shops, market halls and small stalls. We liked it very much, bought lots of things and ate some of the special food at the market. After that a part of the group visited the British Museum, which is a place with lots of historical objects. Later in the evening we watched the musical "Charlie and the chocolate factory", which impressed us a lot.

The first thing we did on Thursday, our last day in London, was a ride with the London Eye, which lasted for about half an hour. Then we went to Buckingham Palace but unfortunately, we did not see the Changing of Guards. On the way to Buckingham Palace we also passed Big Ben, which looked very beautiful in the good weather we had. In the early afternoon, we went to Dover and then back again to Calais by ferry and early the next morning we arrived in Coburg again.

The whole trip was a great experience and we are glad that we could go on it! 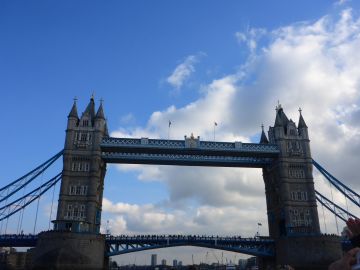