The pupils talk about South Africa in grade 10 with a special focus on Nelson Mandela and his struggle against Apartheid in South Africa. Despite the length of the play (100 minutes), the pupils of grade 10 were impressed by the density and speed with which Nelson Mandela´s life, from his early childhood until his presidency, was depicted. In clear contrast to many a politician of today, Mandela really had something to say to his people and the world by basing his politics on his role model Ghandi and non-violent resistance. During the play all the actresses and actors playfully took on different roles, represented different characters and did all that in a very convincing manner. This performance again was both good for the language and for the mind. Thanks a lot, ADG! 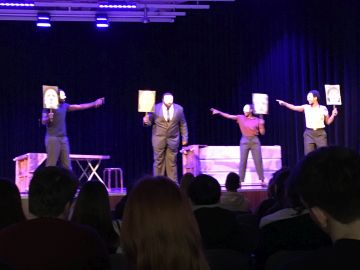